Sean Dale fires a 9-under 63 to become the 73rd Florida Open champion. 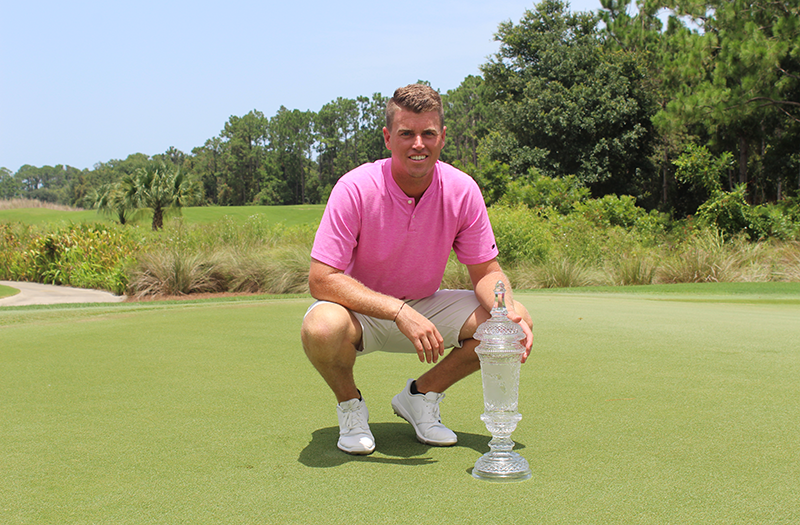 PALM COAST, Fla. – An hour and a half. That’s how long Sean Dale had to wait to be crowned the 73rd Florida Open Champion on Sunday at Hammock Dunes Club. Dale fired a final-round 9-under 63 to capture the championship at 12-under 204.

“I’m born and raised in Jacksonville. A Florida boy by heart, so it means a lot,” Dale said.

Teeing off over an hour before the final group, Dale began the day seeking his first Florida State Golf Association win in over nine years. He got off to a quick start with a birdie on the first hole, before adding another two birdies on the front nine.

“I knew that if I could get myself some chances at birdie, they got to eventually fall. I hit 13 to 14 fairways and 17 to 18 greens, so it made it pretty easy.” Dale said.

He turned it up on the second nine, birding three of the first four holes. Dale added an eagle on the par-5 14th hole, hitting a 5-iron from 215 yards to 10 feet. The Jacksonville native played his final four holes at 1-under with a birdie on the 17th and finished with a bogey-free final round.

After beginning the day eight shots behind leader Mickey DeMorat, Dale headed to the clubhouse with a two-shot lead over the field.

DeMorat started the day with three-stroke lead, but couldn’t get anything going on the front nine, finishing with a 37. After four pars to start the back nine, DeMorat birdied the 14th hole to pull within one shot of Dale.

The Merritt Island native drained a 12-foot birdie putt on the 17th to head to the final hole in a tie for first.

His tee shot on the 18th went left and DeMorat found his ball in the penalty area. After debating whether to play the ball or take a drop with one penalty stroke. He chose to play the ball. It took two attempts for him to punch the ball out in fairway.

The Liberty University graduate hit his fourth shot to two feet and tapped it in for bogey, securing the championship for Dale.

This was the second Florida State Golf Association win for Dale, after he captured the 2010 Florida Amateur Championship. He becomes only the eighth player in FSGA history to win both the Florida Amateur and Florida Open.

“It’s special. Being eight shots back coming into today, it wasn’t really expected. I had a good front nine and kept it rolling,” Dale said.

DeMorat took home another top-five Florida Open finish, posting a 11-under 205 to take second place. Tyler Collet carded another 3-under 69 to secure solo third place at 10-under 206. Rod Perry and Travis Huston finished in a tie for third place at 9-under 207.

Nick Gabrelcik shot a final-round 7-under 65 to earn low-amateur honors. The 17-year-old finished the championship in sixth place at 8-under 208.

The men’s schedule will continue with the Four-Ball Championship on July 27-28 at  Pine Tree Golf Club in Boynton Beach.