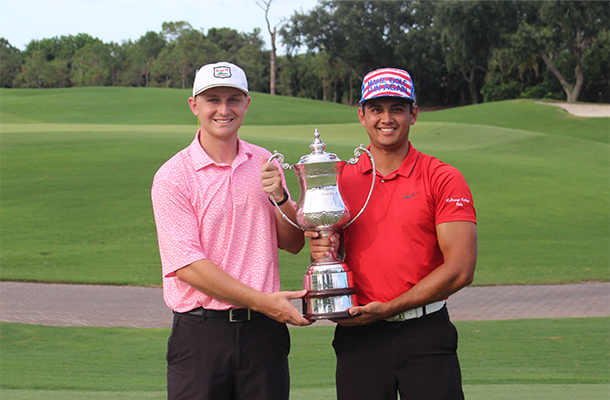 BOYNTON BEACH, Fla. – An impressive fourteen under-par total from Eric Havixbeck and Anthony Scolapio secured a Four-Ball Championship a wire-to-wire victory at the prestigious Pine Tree Golf Club. The Jacksonville natives and former LaGrange College teammates paired up for the first time in team competition to give them both their first FSGA Championship.

The perfect weather and pristine conditions at Pine Tree, led to a leaderboard highlighted by red numbers after round one.  Eric Havixbeck, of Jacksonville, and Anthony Scolapio, of Ponte Vedra Beach, took a three stroke lead with an impressive ten under-par 61. The duo fought through the front nine staying even par through the eighth hole. Excitement began when Scolapio eagled the par five, ninth hole and the two traded birdies on holes 11 through 18 to pull ahead of two teams tied in second place.  2018 U.S. Amateur Four-Ball runner-ups, Marc Dull and Chip Brooke, tied the team of Colin Kresl and Rhett Pooley in second with opening rounds of 64.

A weather suspension in the middle of the final round tested the patience of the players. The team of Carl Santos-Ocampo, of Naples, and Marc France, of Plantation, started chipping away at their five stroke deficit in round two. Turning at four under-par and finishing with four more birdies on the back nine, Santos-Ocampo and France bettered their first round score by three stokes to finish at 129 (-13).  Despite a birdie from Havixbeck on the sixth hole and another eagle from Scolapio on the ninth hole, the first round leaders entered the finishing holes tied with Santos-Ocampo/France. Tied for the lead on the 17th hole, Scolapio hit his approach inside a foot, to move back to -14 with a birdie and one stroke ahead. Havixbeck scored a par on the final hole to secure the first place win by one stroke. Havixbeck and Scolapio posted two rounds lower than their qualifying score at Amelia National Golf Club to be crowned first time FSGA champions at 128 (-14). Marc Dull and Chip Brooke dropped to fourth place after a second round 67 and 131 (-11) finish. Consistency was key for Andrew Kozan, of West Palm Beach, and Justin Burkhamer, of Palm City, who claimed third place with two rounds of 65.