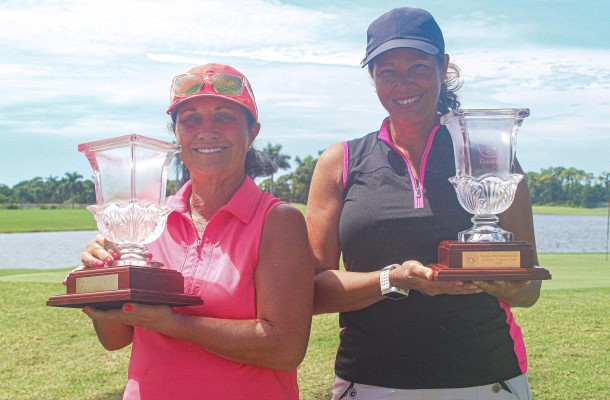 Karen French, of Naples, and Lori Collins, of Jacksonville, played identical rounds to finish the Championship tied for first place at three under-par. Both French and Collins started round two in the lead by two strokes with a score of 70. Both players carded an eagle in round two, French on the par five 12th hole and Collins on the par five eighth hole, en route to a 71 and 141 total. The tie was broken by a modified USGA tie break method that came down to the final nine hole score. French’s eagle and three other birdies on her final nine holes secured her first Women’s Net victory! Mary Ann Modrak, of Sarasota, played steady golf to finish third with rounds of 72-71—143.

The Middle First Flight was won due to an impressive final round 69 from Sandra Shriver, of Melbourne Beach. Shriver posted rounds of 74-69 to win by nine strokes at 143. Terry Doying-Main and Jennie Taylor tied for second at 152.

Two impressive rounds in the red secured a first time win for Sonia Frederick, of Orlando. Frederick started strong in both rounds, making a net eagle on the second hole both days, for a 64-68—132 first place finish. Nancy Suto, of Palm Beach Gardens, took the early lead with a round one 62 at the top followed by Yenisse Cachonegrete in second, one stroke behind. Suto finished with a round two 77 and third place finish, seven strokes back. Cachonegrete, of Boca Raton, claimed second place after a second round 73 and 136 total.